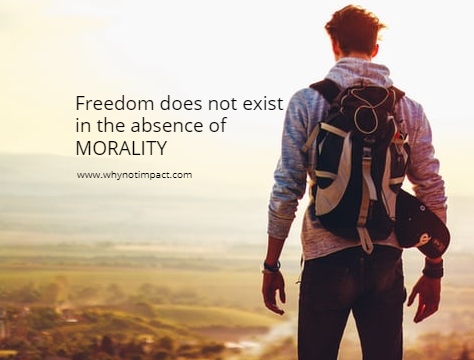 “The further a society drifts from the truth, the more it will hate those that speak it.”

When you’re lost, you’re lost, no matter how much you try to convince everyone around you (and yourself) that you’re not. When we take a wrong turn and find ourselves in a place where we never intended to go, our lack of direction is based on the fact that we’re lost. Morals aren’t “feelings”. Comparing morals to what we feel is like using a thermometer to determine the speed we are travelling. Morals aren’t based on our opinions, despite the fact that the world is wanting us to believe that lie. Morals is the compass that God has given humanity to keep us on the path that leads to a destination of freedom and joy.

It’s obvious that the confusion that exists in society today is because of a lack of clear direction. I can’t wake up in the morning and drive on the wrong side of the highway because I have the sudden urge to do so. My safety is not based on my feelings, it’s based on doing what is right irrespective of whether I feel it is right or not. If people feel that it is important to make laws to protect us, how much more wouldn’t God implement morals to protect every single person that He dearly loves. The crazy notion that we can simply run in any direction because we feel like it is not only irresponsible, but also selfish.

How is it moral to take the life of an unborn child, when that child has no say in it. The world seems to pick and choose what it wants to stand for. The same people who condone the murder of 45 000 000 unborn babies a year, shout for human rights. How do they even sleep at night? Here we are, destroying the livelihoods of millions of people and increasing hunger by implementing lockdowns for the corona virus that has lead to a miniscule number of deaths in the world, compared to abortions, while we are silent about this genocide of those who can’t even protect themselves. Where is the compassion and justice for those who can’t speak for themselves? It is obvious that our moral compasses have been compromised by the lack of trust in the One who is morality.

It’s time that we turn back to God and stop trusting our terrible sense of direction to keep us on track.